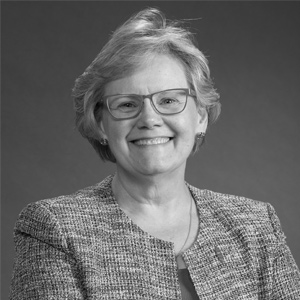 Judy Nitsch is the founding principal of Nitsch Engineering, Inc., a 125 person firm headquartered in Boston, and with offices in Washington, D.C. and Worcester and Lawrence, MA. Established in 1989, the firm has provided civil, structural, and transportation engineering; land surveying; planning; and resilience and green infrastructure planning and design services on projects in 21 states and five countries.

Judy is a graduate of Worcester Polytechnic Institute (WPI) with a BS in Civil Engineering. She has 40+ years of experience, has been a registered professional engineer in 27 states, and is a LEED Accredited Professional. She received an honorary Doctor of Science from the Massachusetts Maritime Academy in 2010 and received an honorary Doctor of Engineering from WPI in 2015.

Her work as a civil engineer has focused on the design, permitting, and management of site development and infrastructure–related projects. Much of her firm's civil engineering work includes consulting for and designing the sustainable sites aspects of green building projects.

In 1989, Judy was elected the first alumna member to WPI's Board of Trustees where she served for 23 years, including 16 years as chair of the Facilities and Campus Infrastructure Committee. Under Judy's leadership, WPI developed two master plans and built many projects, including a campus center, a LEED-certified admissions building, a LEED-Gold residence hall, and a LEED-Gold Sports & Recreation Center. The Nitsch/Magliozzi Green Roof atop East Hall and the Nitsch/Magliozzi Entrance to the Sports & Recreation Center are named for her and her late husband, architect Tony Magliozzi, in honor of her focus on building sustainably on campus.

She is Chair of the Board of Trustees at The Boston Architectural College and on the Board of Advisors of Eastern Bank. Judy was the 2014 national president of CREW Network (Commercial Real Estate Women). She is a past president of the American Council of Engineering Companies of Massachusetts, the Boston Society of Civil Engineers Section/ASCE, and the Society of Women Engineers - Boston Section. She serves as an outside director for Ayers Saint Gross Architects in Baltimore, MD; and for Pennoni Associates in Philadelphia, PA. She is a member of the Advisory Board of E.T.&L. Construction Corp. in Stow, MA.