Marilyn Swartz-Lloyd is working to make cities better for people 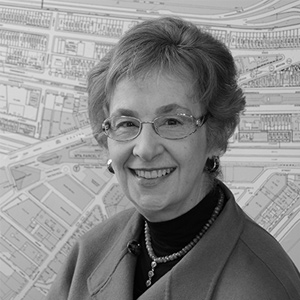 “To get to The Boston Architectural College, you have to take the T,” Marilyn Swartz-Lloyd, Vice Chair of the BAC Board of Trustees explains matter-of-factly. “Even before stepping on campus, you’re thinking about the placement of doors and portals on the subway. You’re standing in front of Massachusetts Avenue wondering what are all these cars doing here? You’re on the sidewalk and saying, why is this sidewalk so narrow? You can’t help but constantly think about how you can use this education to make life better.”

Marilyn has been working to make cities better for people “and breaking down glass ceilings” in the process all her life. She is committed to serving the BAC because the school shares the same determined mission: “It’s continually innovating.” She always tells potential donors and trustees, “Supporting the BAC supports the city of Boston and its workforce.”

Marilyn first served as a BAC Board Trustee in 2016 and was immediately passionate about the school’s open admissions policy. When President Daas delivered his Investiture speech at Faneuil Hall, she was struck by his comparison of the school to The Great Banyan Tree for the thousands of unique community members and their rooted connections to the inclusive ecosystem.

Seated at her sunlit table in a Boston condominium, a space with origins as a 19th century water pump station, Marilyn guides her finger across neat rows of a BAC report. “Did you know that 53% of students at the school are women?” she looks up to ask from behind her stylish, round eyeglasses. A worn copy of The Lewis Mumford Reader, which she calls “My north star,” is cracked open next. She explains, “The thing that excites me about architecture is how it can be a city’s moral compass as well as its design.”

The daughter and granddaughter of Eastern European immigrants, Marilyn grew up in industrial Lowell, Massachusetts and studied Government at Smith College, intending to become a journalist. After graduation, she moved to Washington D.C. to write for the Collegiate Press Service. But when she filed her first stories, the organization's male editor took one look at her work and scoffed, “You write like a girl.” She threw her papers on his desk and said, “Well, then you write it!” and marched out. “You can do things like that early in life,” she explains firmly.

After a public policy stint during Lyndon Johnson’s administration, Marilyn studied for a Master’s in City Planning at Yale’s School of Architecture. Inside the Brutalist building designed by Paul Rudolph was where she cultivated a lifelong addiction to architecture. “We shared the building with the art school. Over the weekend, the artists would repaint the elevators, so you’d come in on Monday and the doors would look like a missile, they’d open and inside was painted to look like an explosion. Upstairs you’d meet many interesting people.”

But it was only after returning to Boston in 1970 to become an MIT planning administrator, that she met one of the most interesting people of all, her future husband of 44 years, the late Tony Swartz-Lloyd. They first laid eyes on one another at a Vietnam War protest.

Marilyn went on to consult in city planning, become head of economic development for the City of Boston, serve as senior advisor to the president of Beth Israel Deaconess Medical Center, and ultimately became CEO of MASCO, the nonprofit organization that provides indispensable services in Boston’s Longwood Medical and Academic Area. The congested urban ventricle hosts 112,000 people each day, from international patients being treated at hospitals, to students, medical professionals, and those visiting cultural institutions. It took all of Marilyn’s previous experience to bring the 21 key stakeholders to the table on a significant variety of issues.” We had to deliberate about transportation, telecommunications, security, real estate development, climate change, the environment, education, childcare, and healthcare. Architecture embodies all of these topics as the physical example of what ideas and policies become.”

Things didn’t always go smoothly. “You learn by taking risks and losing some battles,” she warns. She retired in 2020 and remains particularly proud of launching the MASCO Outside Initiative with her team and multiple MASCO committees. Outside brought public art installations, food trucks, bright yellow umbrella tables, newsstands, storytellers, and roving musicians to Longwood. It’s programs like this one that transforms a group of individual buildings into a lively community.

Marilyn has close relationships with outgoing BAC Board of Trustees Chair Richard Martini B. Arch ’84 and his successor Judy Nitsch. “It is a lot of work, and Richard and Judy just did such a fabulous job getting everyone on the Board very involved,” she says.

In June of last year, to mark her new role as Vice Chair, Marilyn decided to honor Richard’s remarkable dedication with an endowed namesake scholarship to support students facing financial need. She issued a challenge to other board members, and with strong participation, the endowed scholarship now stands over $100,000, which will make a lasting impact in the BAC community. A community that to her delight is becoming increasingly international and outward facing, all while maintaining loyal ties to Boston. “In order to do well, you have to get outside of yourself,” she explains. “You have to get outside the city you love and want to build and come to understand what makes other places remarkable.”

In response to Marilyn’s appointment as well as the scholarship she initiated in his name, Richard shared, “I am truly honored and grateful to be associated with this scholarship. I am certain that it will permanently impact the lives of students at the BAC and have a ripple effect in the wider Boston architecture and design community. I have had the pleasure of working alongside Marilyn for many years, and I am inspired by her generosity of time and philanthropic support, both of which are sure to strengthen the strategic direction of the BAC."